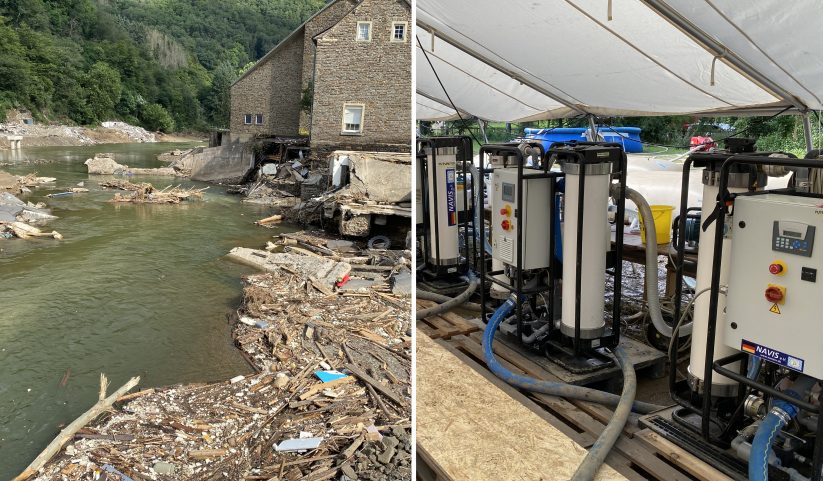 GSK Stockmann donates 15,000 euros to the association Navis e.V. to supply drinking water in the region hit by the flood disaster.

GSK Stockmann has been deeply dismayed by the scale of destruction and loss caused as a result of the flood disaster. The firm would like to thank all helpers and emergency services for their efforts in the affected region and support their work with a donation of 15,000 euros to Navis e.V. The non-profit organisation organises swift medical aid and the supply of drinking water in the event of disasters in Germany and abroad.

Due to the vast destruction caused by the flooding, the entire supply infrastructure in the district of Ahrweiler has collapsed. The volunteers of Navis e.V. are currently on site to support the supply of drinking water. An employee of GSK Stockmann is also actively helping as part of the water treatment team in Ahrbrück.

The district of Ahrweiler has about 130,000 inhabitants, of which about 45% currently have no access to automated drinking water supply. The drinking water plant, which the Navis team set up and operates in Ahrbrück, now supplies around 2,000 people with treated drinking water. An additional 10,000 people will be supplied with fresh water through drinking water tanks. Every day, the treatment plant produces and distributes about 250,000 litres of potable water.

Navis e.V. runs its operations exclusively with volunteers and through donations. The association is delighted about any donation. Further information at: Navis e.V. Homepage