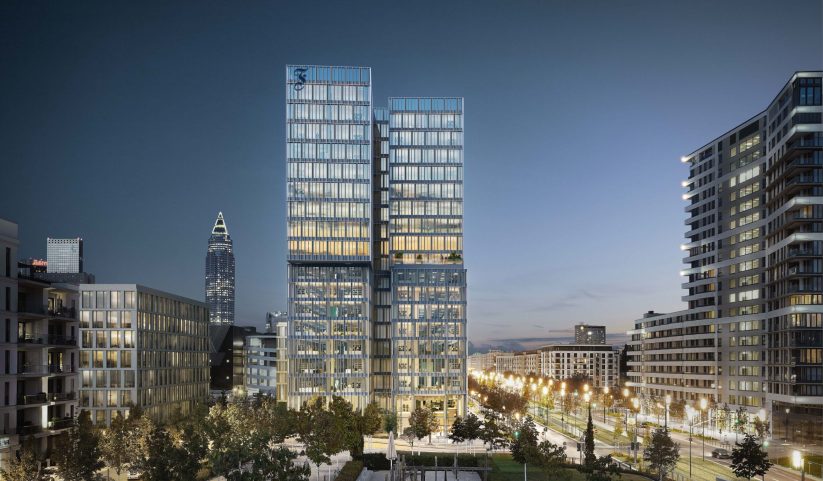 GSK Stockmann advises UBM and Paulus on the sale of F.A.Z. Tower for approximately € 200 million to HanseMerkur

GSK Stockmann provides advice to UBM Development AG and its joint venture partner the PAULUS real estate group on the sale of the F.A.Z. Tower by way of a forward deal to HanseMerkur Grundvermögen. The purchase price amounts to € 196 million. The F.A.Z. Tower is currently being developed by UBM Development (75%) together with the PAULUS real estate group (25%).

GSK Stockmann has comprehensively advised UBM Development AG and the Paulus real estate group on all legal aspects of this transaction.

The F.A.Z. Tower will serve as the new headquarters of Frankfurter Allgemeine Zeitung. The 60-metre high building in Frankfurt’s Europaviertel spans over 18 floors on a gross overground floor space of 27,300 m². The office tower consists of two slim cubes, which turn against each other and their own axis in the shape of a double “H”. The building will be the future gateway to Frankfurt’s Europaviertel and impresses with its majestic architecture, which was designed by the Berlin-based architectural office Eike Becker_Architekten. The future headquarters of Frankfurter Allgemeine Zeitung will house offices for around 1,000 employees. Completion is scheduled for 2022.

In addition to providing comprehensive transaction advice, the team led by GSK Stockmann partner Olaf Schmechel also advised on the division of the plot of the directly adjacent bar-shaped building and the aspects of public law regarding the conversion of this building, originally planned as a hotel, into Frankfurt’s first timber-construction office building.

Olaf Schmechel “In this transaction we were once again able to demonstrate our 360° real estate focus. In addition to the specific features of the forward deal, public law as well as commercial and technical issues had to be anticipated and implemented in a neighbourhood agreement.”

GSK Stockmann has been providing legal support to the project developers since 2018. Therefore, GSK Stockmann advised on the finalisation of the lease agreement with Frankfurter Allgemeine Zeitung and the original hotel lease of the bar-shaped building. The team around partner Olaf Schmechel had accompanied the then joint venture partner Patron Capital (London) during the sale of its shares to UBM and was now involved in the sale to HanseMerkur in the new shareholder structure. GSK Stockmann already provided legal advice to UBM at the beginning of the year on the establishment of the strategic partnership with Austrian Real Estate GmbH (ARE) (https://www.gsk.de/de/umb-und-are-gemeinsame-immobilienprojektentwicklungen-in-wien-und-muenchen/#gref).