GSK Stockmann has comprehensively supported Activ-Group in the process for the preparation of a development plan and the conclusion of an urban development contract with the City of Rüsselsheim for the development of Opel’s historic plant. In September 2020, the city council approved the development plan for the district development of “Motorworld-Manufaktur”; the plan was published in December. The building rights for the project, which boasts approx. 115,000 m2 of floor space, have thus been secured, and the implementation phase will now be kicked off.

According to the plans of the owner and investor, Dünkel Group and their subsidiary Activ-Group, the inner-city area near the railway station – which features a majority of historic buildings – will be home to the new city district “Motorworld-Manufaktur Rüsselsheim”. The new district will be a mix of residential units, retailers, gastronomy, offices, workshops, hotel, services as well as event and exhibition areas all dedicated to the motto of high-quality and classic automobility. The total investment sum for the roughly 6.6 ha large former Opel factory site amounts to 100 million euros. The Motorworld Group has already succeeded in implementing similar projects in Stuttgart/Böblingen and Cologne.

Activ-Group is the largest subsidiary of the Dünkel Group whose headquarters are located in Schemmerhofen (Baden-Wuerttemberg). The company specializes in the project development of specialist and retail properties as well as industrial estates. Main focuses include the renovation and revitalization of historic buildings.

With a team led by partner Dr. Mark Butt, GSK Stockmann provided comprehensive advice to Activ-Group in all matters regarding the complex procurement of building rights for the conversion of the former industrial site with listed buildings into a modern urban quarter with mixed use. This involved extensive consultations with the authorities in order to draw up a new development plan and conclude an urban development agreement with the City of Rüsselsheim.

GSK has been advising Activ-Group on project development for many years ever since their first collaboration on developing the industrial park in Parsdorf near Munich. 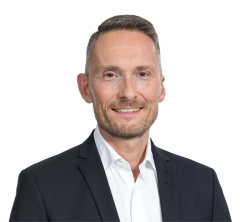